History of the club

Bideford was founded in 1926 by local players who had, until then, played for its neighbour, Barnstaple RFC. It was the beginning of a long sporting rivalry between the clubs. Bideford played their first game at Victoria Park against a Barnstaple reserve side. Victoria Park remained Bideford’s home ground until 1929 when they moved to the Sports Ground. This ground was shared with the local football side, Bideford AFC.]During the 1930s, the club had a degree of success in the Devon Junior Cup (the secondary cup competition for men’s rugby at the time), winning the competition in 1933 and 1935. In 1969, Bideford left the Sports Ground and moved to King George’s Field, where we currently play. They won the Havill Plate in 1975. 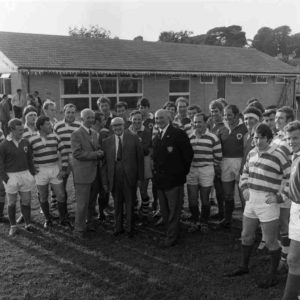 When leagues were introduced for the 1987–88 season, Bideford was placed in Courage Cornwall/Devon, a regional league for Cornish and Devon-based clubs ranked in tier 8 of the English league system. In 1992, after four seasons in this division, the club finished as champions and thus were promoted to Tribute Western Counties West. They remained part of Tribute Western Counties West for six years. In the 1997–98 season, they finished last and were relegated, returning to Cornwall/Devon. In 2001, Bideford achieved promotion as runners-up and returned to the Tribute Western Counties West league. This promotion was short-lived; they were relegated the following year after a poor league campaign which saw just 1 win in 22 games. Two years later, Bideford sunk to their lowest ever league ranking and were thus relegated at the end of the 2004–05 season to Devon 1.

The 2006–07 season saw Bideford start to rebuild, and they finished second in the league behind champions Teignmouth, qualifying for a promotion play-off against the runners-up from Cornwall League 1, Liskeard-Looe. Due to a better league record, Bideford had home advantage, and they managed a win, allowing a return to Cornwall/Devon. The next year saw Bideford not only stave off relegation with a mid-table finish, but also win the Devon Junior Cup for the third time, beating Teignmouth 23–7 in the final held at King George’s Field. Bideford won the league and cup double during the 2010–11 season, first winning Tribute Devon/Cornwall with 25 wins from 26 games and then outclassing Crediton, 45–12 away, in the final of the Devon Intermediate Cup. A second intermediate cup victory followed the next year as Bideford beat Okehampton 51–17 in front of a home crowd of around 400 supporters.

In 2013, Bideford finished second in Western Counties West after losing a competitive title battle with eventual champions St Austell and qualified for the promotion play-off against Western Counties North runners-up, Wells. Despite having to travel to Somerset, Bideford survived a late fight back to clinch promotion. This promotion saw Bideford play in Tribute South West 1 West for the 2013–14 season, which, at tier 6, is the highest level the club have played at In 2017-18 Bideford were relegated from Tribute South West 1 West after three years in the division, finishing second bottom to drop back down to Tribute Western Counties West