The teams were split into the Runners and Others on account of the cross country guys that cant always play.

The Others were in fine form. It has to be said that Daisy Bowden  who is consistently our best defender was in no mood to let anyone past her and she delivered several thumping tackles. Harry Parker, Noah and Adam Norman both provided some big defence as well and carried all day offloading to the other team members.  Caleb Stanton was again full of beans and was working hard in defence and gave out some lovely passes. Olly Garnett had another solid weekend with plenty of running and a couple of good trys.  Finn Booth was in particular good form scoring 8 trys across the two games and was the pick of the two team.

The Runners first game was absolutely fantastic with some great passing and opportunist trys.  Theo Rowe was in fine form with some sniping trys out wide and his pace was fantastic. Thea Northcott and Isla Winter both fresh as daisies from their trip to watch the English Roses were in fine form. They linked very well for several trys with great handling skills.  Ethan Liepa and Jake Maund we both powerhouses carrying the ball and Eben Clements had his finest game with some great tackling. The pick of the runners for both defence and attack was Riely Loyd who literally didn’t miss one tackle all day.

Ilfracombe never gave up all day despite having a couple of injuries and they can be very proud of there play in both matches. We look forward to the return matches on the 30th March. 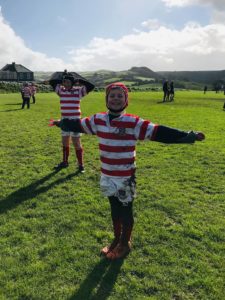